The slatestone architecture in the schistic Cevennes 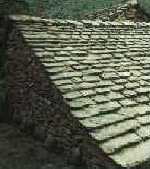 In the slatestone Cevennes there's such a harmony between landscape and architecture that it looks like the constructions are grown instead of built, grown out of the rough rocky nature.

The traditional rural architecture is purely created out of natural materials:  slatestone and chestnutwood available at the spot. The knowledge of materials and technics has been transmitted during centuries, always improving and anticipating to new demands.

Caracteristic to this region is the culture on terraces, the chestnut-trees, its avowed relief and its clement climat due to the Mediterranean influence.
The most buildings are constructed halfway the slope and if possible just beneath a source.

Belonging or close to a farm (mas) or hamlet cévenol, you can distinguish a variable number of the folowing elements: 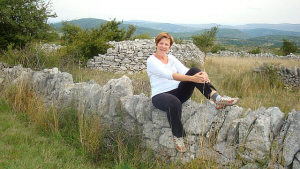 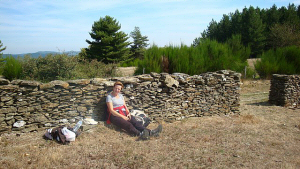 The dwelling of rectangular plan leans on the rock and even is partially integrated in it in the most of the cases.
The oldest ones, from the year thousand when monks out of the Gevaudan and the Languedoc came installing here modest priories, always are perpendicular at the mountain .

The extensions were firstly realised by preference by elevation, which presented the least material, work and upkeep. Besides earth was economized and man avoids this way to create a new seat in the slatestone rock, a slippery and breakable stone.

The house is stacked up by following the terraces, thus every floor is ground floor at one side.

The almost autarkic history of each farm evoluates with the agricutural demands and modifies with each wave of population-increase (16th, 18th and  a maximum in the 19th centurie).

In these demographically  positive periods future potential neighbours were foreseen in the constructions by sticking out stones in the angles to support and connect the walls.
In general a new wing is built perpendicular at the previous building, parallel with the mountainslope.

To avoid the roof to be ajusted in ‘L’- form often a difference in height is chosen so the highest roof drains at the lower one. With all the extensions made in different periods for persons, goats, sheep, rabbits, pig(s), donkey, chickens and material, this results in a cascade of roofs differing in direction and height.

Sometimes the extensions at more prosperous farms don't encircle the first construction but evoluates in more open plans like a L, F, H, U, two parallel wings or enclosing a courtyard.

New buildings can also be detached with or without any special structure. Everything depends on period, terrain and constructor. Also the dimensions af all these prototypes of constructions change, in general we can see they grow bigger in time with the progress of technical know-how depending on the financial possibilities.

Especially the revival of the silkindustry and the big rooms needed to keep the silk-worms (magnans, magnaneries) implicated new big constructions of 3 or even 4 huge floors. limestone cadres in a slatestone wall
The technical progres, the need for a lot of windows to maintain a constant temperature for the silkworms and the closedown of the taxes at openings gave architecture a new appearance.

The lowest floor partially in the rock were water is thrickling out serves for goatstable or cave. The water is open canalized outside.
The first floor is occupied by kitchen / living with a very big chimney in the gable at the mountain side. Opposite there is a window looking out over the valley.
The second floor or even the third one, if there are, are for storage , magnanerie or bed-room depending on period and demands.
The house follows the mountain which is given form in terraces and has groundfloors acces at each level .
The kitchen-entrance consists usually of a stone stair outside, going up between the entrances of the caves.
Rooms partially included in the rock have a vault instead of timber because of the humidities of this parts.retour ...

At some places you can see in the slatestone rock cutted foundations (les pèdes) not in depth like usual but in relief.
But mostly the constructions joined to the whole ( first very simple but later on more and more complex and personalised) take walls or parts of them like seat. This way outside walls become inside ones.

Every mas, hamlet or village has got very old parts just started at the rock like it was , and a lot of changes during every following period. 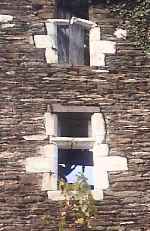 The attention paid to the seat is of essential importance to the age of a wall, especially in slatestone with its slippery and breakable nature.

Where the foundation is not made correctly walls  often fall down. Certainly the terrace-walls built without mortar are concerned by this problem. Also rains, treeroots and the big number of wildboars are destructive factors.

The stratified structure of slatestone walls garantuees an amazing élasticity.So you can see large bosses and cavities in the wall without real risk for its health. With the right tools and engins this can be redessed as well.slatestone terrace wall - Vallée Française

A lot of (parts of) walls have come down by the collapse of the roof, caused by lasting leaking and putrefiying of the main beams or by a heavy load of snow.

In spite of all kinds of erosion influences we can say with pleasure that the most of the mas and bancels are still intact and bear witness to an extraordinairy patrimony of a confectionated landscape.

The lintels, door- and windowframes and angle-stones were all  slatestone at first, but later also out of other stones or even chestnutwood. Period, region and money determined which other kind of rock was used such as sandstone, limestone, kersantite, basalt …

Above the lintels there are two kind of open spaces in the slatestone to avoid the weight of the wall pushing at the lintel. The oldest one is a rectangulair space the later version is a  triangle.

Every construction can be said to be functional and inventive and shows attention to details, personnality and harmony.

During a  long time mortar at chalk-base was only used for the living quarter. During the golden period of the silkindustry people were  rich for the first time, having cash money, an exception to the usual bartel, so a lot of them plastered and painted their houses., with 4 colours, pink, ochre and two kinds of blue and false painted anglestones. The most of the plaster and colours is gone but you can still see parts of it at some farms. retour ...

Slatestone, properties of the material 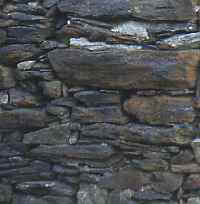 Schist, sombre and shining with golden, silver or bluish reflects, can easily be recognized  by its stratified puff-pasty and folded aspect.

Slateston is essentially composed of mica in fine little scalies and shiny in different colours, it varies with its chemical composition. Consisting of silicium and aluminiumoxides it is associated with different other elements.schist bedrock

So mica might be white in cristal-form more or less big: muscovite or sericite.

She can also be black in scaly-form: biotite, or rust-coloured by ironoxide. Schist varies a lot from one valley to another.
The little white layers in between the strata of schist are accumulations of quartz which are old layers of cristalized sand.retour .

Even the roof is made out of slatestone ( les lauzes) , the beams and the rest of timber are chestnutwood .

The hight of a chestnut-tree limits the breadth of a slatestone construction. The roof-construction is made in a way and gradient such that the most of the weight of the very heavy roofing is carried by the walls
.roof of "lauzes" - Vallée Française
The main force is demanded of the ‘tirants’- the beams perpendicular at the walls who keep the building together. These are fixed by dovetails in the‘sablières’-the beams laying at the top of the wall.
The ridgepole( la panne sablière) is hold by big triangulairs "les entraits", and the weight of the slates are carried by chestnuttimber supported by a lot off little beams (les chevrons). Only one thirth of the slatestones is visible.

Water is of vital importance since always, and for ever.

The cévenols have constructed a very ingenious system to regulate the water-household, with two purposes : to have and to avoid water.

The main need for water was for agriculture purpose for cattle and irrigation.
The second need was stocked water for hydraulique energie ( mills, forges, spinning-mills forges, …) but also drinking-water and a little water for washing and cleaning.

To avoid water and damage by heavy rains and inundations they've built and cut out of the rock a lot of amazing constructions.