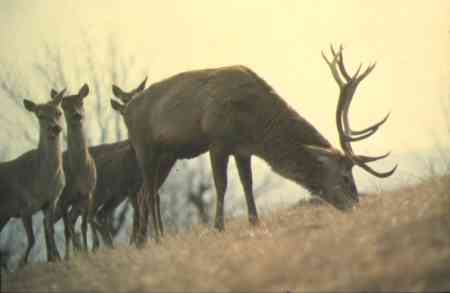 Disappeared from the Cevennes with the decline of the forests. Successfully reintroduced in stages by the National Park between 1974 and 1976; flourish well in mixed forests not too dense with sparse open spaces.

Color: red spring changing to gray in Winter, the fawn of 1 year is spotted.

Renowned and feared by their ability to jump 2 meters high and 9 m. wide. Depending their size and age and weight varies (80 to 180 kg.)

Often living in groups, one male, who carries the woods, and several females with their fawns of various years. Food: plants, fruits and bark, chestnuts etc.

September: females in heat males begin to belling.
In May: the birth of a single fawn, which stays living for at least 2 years with its mother ..