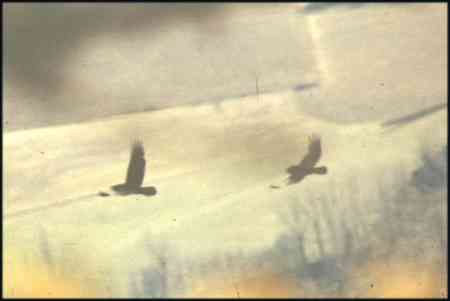 In general the most advanced  in evolution, the most intelligent and most adaptable of all birds .

The largest all-black bird of the region; adult can be told from all other crows by huge size, as large as a Buzzard, stouter bill and distinctive voice. Even juvenile shows the greater length of bill, head and neck projecting in front which can give the adult an almost Maltese-cross appearance on wing.

Has a longer neck and stouter bill than smaller Carrion Crow and Rook.

Flies rather heavily, but often soars and in spring performs remarkable acrobatics, 'tumbling', flying upside down and nose diving; walks, rather majestically.

When common will flock, especially to roost, but in breeding season usually in ones, twos or family parties.

Usually nests on a rock ledge, but sometimes in a tree; one of the earliest birds to start nesting.