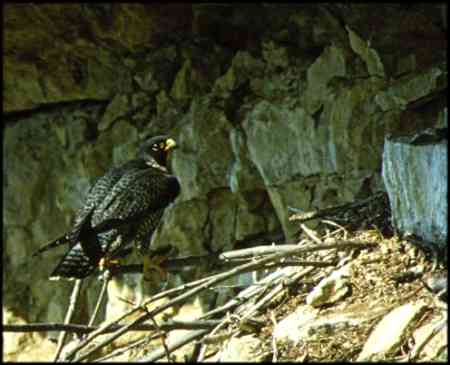 Readily identified in flight by distinctive anchor-like outline of long wings and rather short tail, and characteristic fast, winnowing wing-beats, followed by a glide; also frequently soars, indulges in acrobatics, and swoops steeply on pray in a power dive.

Plumage very variable, from dark to light grey above with buff underparts barred dark grey; black  moustachial streak is conspicuous against white chin and cheeks. The southern races in Mediterranean have some rufous on nape.

Female much larger than male.Juvenile dark brown above, streaked instead of barred below, and with legs, cere and bare skin round eye blue-grey instead of yellow.
Chief call a harsh deep chattering falcon note. Open country, especially with crags or cliffs for breeding, occasionally in foirests and on tall buildings in towns.top
15 - 19 in.