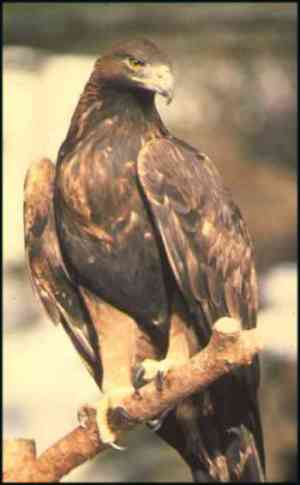 Adult tawny brown, sometimes with pale head; immature distinguished by white base of tail and white patch on spread wing.
Differs from White-tailed Eagle in square, not wedge-shaped tail and fully feathered legs. Adult has dark tail like immatureWhite-tailed, but immature has much less white on tail than adult White-tailed.

Rather silent, but has a buzzard-like 'twee-o' and a barking call. Has a majestic soaring and gliding flight, with wing-tips splayed out and upturned, often remaining on the wing for hours at a time.
Mainly mountainous country, often treeless. 30-35 inch