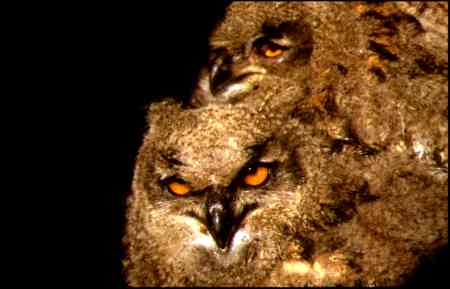 One of the two largest owls of the region, an enormous, almost eagle-sized bird,
The  prominent ear tufts do not represent true ears.Sexes alike.

Flight slow and flapping. Stance upright. Nest in  a hole, or in  a old nest of other bird or even at the ground. Eyes large, orange.Song: a deep 'oo-hu'; other calls include a harsh 'kveck, kveck'.

Dense forests, rocky gorges. Hunting at down and dusk for mammals as large as roe deer and birds as large as Capercaillie.top
26 - 28 in..