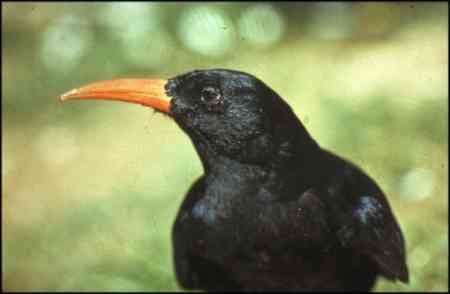 The only all black bird of the region with red bill and legs, which distinguish it at once from both Alpine Chough and the black Corvus crows.

Lack of grey on nape separates it easily from smaller Jackdaw. Juvenile's bill tinged orange. Starling-like chattering subsong is rare; one common call-note is like a young Jackdaw's 'kyow', another is more gull-like than corvine, and a third 'k'chuf' has given the bird its English name.

Flight much more buoyant  than other black corvids, and performs acrobatics like Raven; both walks and hops. Flocks usually small.

Very fond of  steep, ragged cliffs of the gorges and Causses, nests in rock crevices.
15 1/2 inch.